The Jacobson Firm, P.C. is a firm that handles intellectual property law, including all domestic and international trademarks, copyrights, and licensing issues. They provide services to the music and entertainment industries, as well as to those in the sports, esports, jewelry, creative and visual arts, video, multimedia, photography, television, fashion, magazine, video and board games, and internet industries.

We aim to provide outstanding and affordable legal services to influncers, talent and other individuals as well as large and small corporations and businesses.

Our goal is to be on the cutting edge of current and developing intellectual property issues to best serve our clients worldwide. Combining our expert contract negotiation and business law skills with our industry expertise, we are able to assist talent and brands in every major entertainment industry, including the esports and professional video gaming space.

We strive to provide exceptional, complete services and creative solutions for all of our clients’ legal issues. 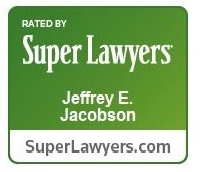 JEFFREY E. JACOBSON is a member of the Bars of the State of New York and District of Columbia. He is admitted to practice before the United States Supreme Court, the U.S. Court of Appeals, in addition to Federal trial courts, and the U.S. Court of International Trade. He is President of the Jacobson Firm. P.C. In New York City and Westhampton as well as an Adjunct Professor. Named a SUPER LAWYER for the seventh time in a row in 2020, he has been Av rated by Martindale-Hubbell for nearly 35 years. Previously, he served as attorney for SESAC, Inc., the music licensing and performing rights organization.

For over thirty-five years, he has been a member of the Copyright Society of the USA and has served on the Editorial Board of the society’s journal since 1989, been a Trustee, sat on the Executive Committee, and co-chaired their web committee. He also founded the Urban Intellectual Property Seminars program conducted by the Young Lawyers Division of the American Bar Association. He serves on numerous entertainment law committees and is extremely active in the copyright bar. Jeffrey teaches Advanced Music Business at Ramapo College of New Jersey and was an Adjunct Associate Professor at Five Towns College in Dix Hills, NY for a decade instructing students about Music Business Contracts. He has also taught Copyrights and Music Publishing as well as The Business of Music at the Institute of Audio Research in New York City for several years.

Jeffrey is a prominent figure on the lecture circuit, having spoken at many institutions including NARAS’ Musicares, the American Guild of Authors and Composers, the Songwriter’s Guild, the Center for Media Arts, Fordham University, Pace University, the Detroit School of Law, the American Federation of Musicians, the Media Law Project Seminar of New York Law School, the Mid-America Music Conference, The CMJ (College Music Journal) annual conference, Philadelphia Music Conferences, the Black Radio Exclusive Conference, the Touro Law Center, and many others. Some of his lectures are available on videotape and cassette, including a lecture entitled “Copyright in the Performing Arts,” published on the audio cassette periodical “The Audio Lawyer,” and distributed by the American Law Institute.

Adding to this impressive list of accomplishments, Jeffrey has served on the prestigious Communications and Media Law Committee of the Association of the Bar of the City of New York as well as serves on their Entertainment Law Committee, has served on their Trademark & Unfair Competition Committee, Copyright and Literary Property Law Committee.  He has been on their CLE faculty as well as their special N2K Task Force. Chairing the subcommittee in the Intellectual Property Law section of the American Bar Association, Jeffery composed reports on topics such as “Satellites,” “Copyright Renewal,” and “Copyright Law Compliance for Authors” as well as Chairing their Broadcasting, Sound Recording and Music Committee. He was also on the Advisory Committee of the New York Music Task Force, Inc., and served as Vice-President of the Performing Arts Unit of B’nai Brith.

He was born in the Bronx and received his degree in Philosophy from Fordham University at the age of 19. Working his way through college as Manager of the Criterion and Embassy Theatres on Broadway he attended New York Law School. While there, he won the ASCAP Nathan Burkan Memorial Competition with an article on Copyright and Fair Use which was published in the Fall 1980 issue of “Communications and the Law” and serialized in New York Law School and Pace University Law School publications. Subsequently he chaired the Nathan Burkan Competition review committee in the Copyright Society.  He clerked in the United States District Court for the Southern District of New York and graduated from New York Law School in 1980 at age 23. In his pre-attorney life, Jeffrey managed several bands, served as a consultant to record companies, was President of a music production company, and President of two music publishing firms. He is listed in “Who’s Who in America,” “Who’s Who in the World,” “Who’s Who in American Law,” “Who’s Who in Entertainment,” “Who’s Who of Emerging Leaders in America,” and “Who’s Who in the East,” as well as many other domestic and foreign biographical works. Jeffrey is also a member of the Rock & Roll Hall of Fame, the National Academy of Recording Arts & Sciences, The Audubon Society, and many other civic and entertainment organizations. 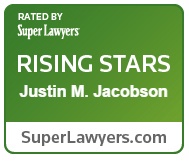 Named a Super Lawyer “Rising Star” in Intellectual Property law for the last six years, Justin M. Jacobson, Esq. is an entertainment and esports attorney in New York City. For the last decade, he has worked with professional athletes, musicians, producers, songwriters, DJs, record labels, entertainment companies, fashion designers, as well as professional gamers, streamers, content creators, coaches, on-air talent, esports organizations and teams, event and tournament organizers, video game publishers and developers as well as other business and individuals involved in the professional video game and esports space. He assists these individuals and companies with their contract drafting and negotiations, copyrights, trademarks, immigration issues, taxes, litigation and other related business, marketing, and legal issues. He has successfully negotiated esports player, coach and caster contracts, endorsements, personal appearances, recording, publishing, streaming, distribution, and licensing deals.  He has secured agreements with some of the entertainment world’s largest companies, including Universal Music Publishing, Viacom, Netflix, and RCA Records as well as litigated in federal and state courts as well as handled a JAMS (ADR) music dispute. He is a frequent contributor to many industry publications and has been featured in a variety of entertainment, music, sports, and esports publications and podcasts, including Business Insider, The Esports Observer, Esports Insider, Tunecore, Esports Talk, Mental Floss, Operation Sports and Sport Techie.

Justin has positioned himself as a top esports business professional working with talent in a variety of franchise leagues including the Overwatch League, Overwatch Contenders, and Call of Duty League as well as in many popular competitive titles such as Fortnite, CS:GO, Valorant, Gears of War, Halo, Super Smash Brothers, Rainbow 6, PUBG, Madden, NBA 2K, Street Fighter and FIFA and mobile games such as Brawlhalla, Clash of Clans, Wild Rift, and Call of Duty mobile. He is currently an Adjunct Professor of Esports at University of North Carolina Wilmington and has authored The Essential Guide to the Business & Law of Esports & Professional Video Gaming textbook. He is an Industry Board Advisor for the International Esports Journal and has also served as an Instructor of Music Business at the Institute of Audio Research in New York City for several years.

Prior to joining The Jacobson Firm, Justin interned in the Business and Legal Affairs Department of Tommy Boy Entertainment, the Legal and Membership departments of ASCAP and made history as the first college intern at the U.S. Copyright Office in Washington, D.C.  He also worked at MTV in the Digital Music and Website Development Department – dealing extensively with digital music video distribution – and the marketing department at RAS records (Reggae label subsidiary of Sanctuary Records). 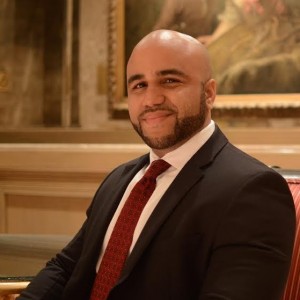 PABLO G. VELEZ’s practice encompasses all areas of immigration law, with emphasis on business and family immigration. Mr. Velez has represented and assisted international and domestic businesses, professionals, and individuals from all over the world in the successful filing and petitioning of various immigrant and non-immigrant visas for corporations, families, and investors. He also has significant experience with refugee matters, especially with asylum cases, and has represented clients in removal proceedings before the United States Immigration Court.

Mr. Velez also has extensive experience in representing and defending in-state and out-of-state insurance carriers in both litigation and arbitration forums in numerous civil litigation matters, with particular emphasis on no-fault/PIP and insurance fraud.

Mr. Velez is a graduate of the George Washington University’s Elliot School of International Affairs. He received his Juris Doctorate from the University of Detroit Mercy School of Law. Mr. Velez also studied abroad at Universiteit Utrecht in the Netherlands.

Mr. Velez is admitted to practice in New York and New Jersey. He speaks both English and Spanish. 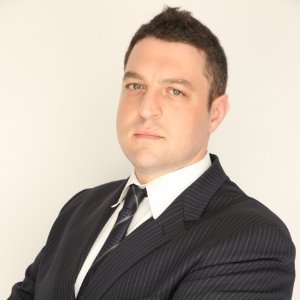 PETER J. CIPRIANO’s practice focuses on providing legal advice and corporate guidance to domestic and international corporations of all sizes with emphasis on corporate formation, compliance and governance, as well as general business planning and strategy. He has significant experience in assisting domestic companies establish a presence and conduct business in Asian markets, as well as assisting foreign companies with all of their corporate and business immigration needs in order to conduct business in the American market.

Mr. Cipriano is a graduate of the University of Michigan, where he graduated with high distinction, and is a member of The Phi Beta Kappa Society. He received his Juris Doctorate from Wayne State University Law School. Mr. Cipriano also studied abroad at the University of Tokyo under an academic scholarship from the Japanese Ministry of Education.

Mr. Cipriano is admitted to practice in New York and New Jersey. He speaks both English and Japanese.